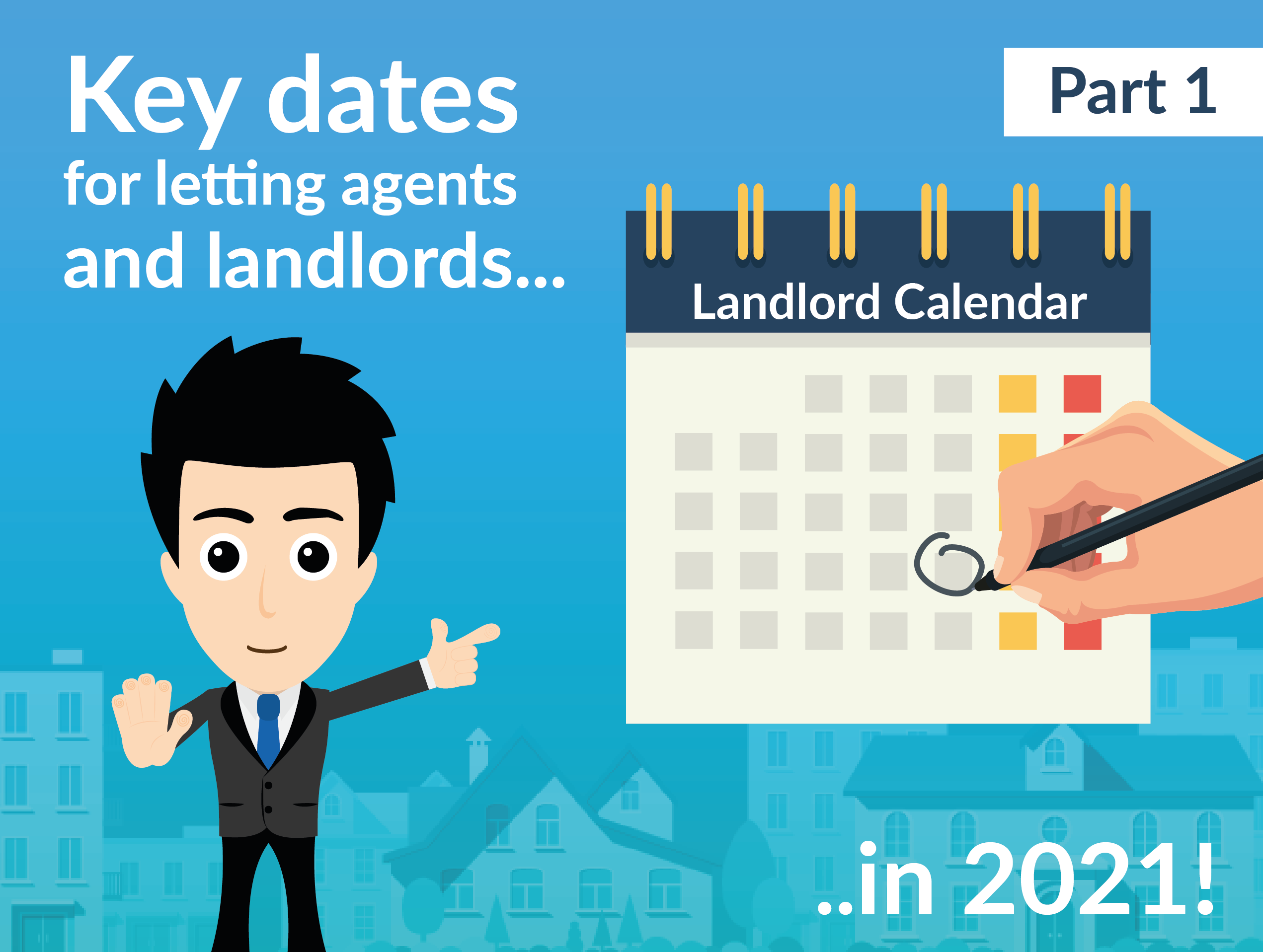 Part One: Key dates for letting agents and landlords in 2021

Last year was a year like no other for landlords and agents, with the competing challenges of the pandemic and a whole host of new regulation to contend with.

As well as the difficulties (and opportunities, too) of operating during a global health crisis, new legislation – or the beefing up of existing laws – continued to creep in. That was on top of a ban on evictions for the majority of the year.

But what are the key dates for agents and landlords to keep an eye on in the first half of 2021?

The date for MPs to hold the Second Reading of a Bill aimed at abolishing no-pet clauses in private rental contracts has been set for January 29.

The Dogs and Domestic Animals (Accommodation and Protection) Bill builds on a commitment already made by the government to give ‘responsible and caring’ tenants the assumed right to live with a pet.

“Sadly, pet owners who move into rented accommodation face the reality that their family could be torn apart, because most landlords in Britain have unnecessary bans or restrictions on pet ownership.”

There are a number of standards that pets must meet before they are allowed into rental homes, under the proposed legislation, with tenants needing to verify their and their pets’ credentials. This includes the need to obtain a certificate from a vet before moving in, confirming that they have a ‘healthy, well-behaved animal’ and are considered to be a responsible owner.

Dogs, for example, would need to be vaccinated and microchipped, as well as being responsive to basic training commands.

Many landlords refuse to allow pets in their properties at present because of the risk of damage and other associated problems, and even an attempt by the government to rewrite the model tenancy agreement at the start of last year hasn’t changed things much.

But there is a good chance that the above Bill could become law before the year is out, and it may be wise for landlords and agents to get ahead of the game, assuming already that tenants have the right to keep pets so you are prepared for what’s to come. On the upside, demand for rental homes with pets is huge, and ever-growing, so those already set-up to accept tenants in their homes should benefit most when – and it seems to be a matter of when, not if – this new law is passed.

February – the end of the eviction ban (in theory)

On January 8, the government – to the shock of very few – decided to extend the ban on bailiff-enforced evictions until at least February 21, when it will be reviewed. However, with the current pandemic situation, and the likelihood that the UK will still be under lockdown restrictions by that point, most think the ban will be extended again.

While Housing Secretary Robert Jenrick said, when revealing the latest extension, that landlords or agents acting on their behalf are still able to enforce possessions orders if tenants are more than six months in arrears, irrespective of when the arrears have been amassed, bailiffs won’t be able to enforce any court orders to evict until next month.

This means that landlords will struggle to regain possession of their homes or evict tenants unless there are exceptional circumstances at play, such as domestic violence or serious anti-social behaviour.

Even then, there is a huge backlog of cases that still need to be heard. Landlords and agents should get used to the idea of evictions being off the table for quite some time yet, and seek alternative solutions. The government is piloting a new mediation service to try and help landlords and tenants ‘reach a mutual agreement and keep people in their homes’.

Working with tenants to come to an arrangement on arrears, or working through disputes without the need to go to court, are likely to be the best options for the foreseeable.

March – the end of the stamp duty holiday

On March 31 2021, the stamp duty holiday – which has provided substantial savings to landlords purchasing properties since July 7 2020 – is set to cease, with the previous rules applying again from April 1.

Buyers have been warned to act well in advance of the deadline, but the pressure is growing on the government to extend the holiday to avoid a cliff-edge scenario. A petition calling for an extension recently breached the 100,000-signature threshold required for a debate in Parliament, but Jacob Rees-Mogg - the leader of the House of Commons – is reported to have temporarily suspended debates in Westminster Hall, where petition discussions are typically staged.

Additionally, everyone from conveyancing and agent bodies, to Tory MPs, have called on the Chancellor Rishi Sunak to extend the deadline. But landlords and agents should, for now, assume that the holiday will end as planned.

April 1 - the need for electrical compliance

On June 1 last year, new regulations compelling landlords to have the electrical installations in their properties inspected and tested by a person who is qualified and competent, at least every five years, came into force.

As a result, landlords must provide a copy of the electrical safety report to their tenants, and to their local authority, if requested.

Initially, the regulations only applied to new tenancies – in other words those granted after June 1 2020 – but from April 1 2021 they will apply to all existing tenancies, too.

The fines for non-compliance could be considerable, with local councils potentially levying a financial penalty of up to £30,000 on landlords who aren’t playing by the rules. More information on the changes and what you need to do can be seen here.

The government recently set out the details of its new Debt Respite Scheme - also known as Breathing Space – which is set to be implemented from May.

There are set to be two types of breathing space. A standard breathing space will be available to any individual with problem debt and provides them with legal protections from creditor action for up to 60 days.

However, the standard breathing space can only be accessed through an approved debt adviser registered with the Financial Conduct Authority, or through a local authority if said local authority is approved to offer this kind of advice to its residents. It is not, the government insists, a ‘payment holiday’. It’s also not possible to apply for such a space more than once a year.

It offers stronger protections than the standard breathing space, as it lasts as long as the client’s mental health crisis treatment, plus an additional 30 days, regardless of how long the crisis treatment lasts.

The schemes are something that landlords and letting agents must be aware of, as it could make seeking arrears or evictions much more difficult, plus there are considerations around handling these situations sensitively and with tact.

It seemed like this Bill – which includes the scrapping of Section 21 and the introduction of lifetime deposits – was some way off, pushed down the pecking order by coronavirus and Brexit. However, a junior housing minister recently suggested it would be introduced ‘very soon’, making a mockery of the previous commitment to only introduce it in a stable and settled economic and social environment.

There has been no concrete information about what ‘very soon’ means, and very little follow up to Kelly Tolhurst’s comments, but it’s something for landlords and letting agents to be aware of as a possibility later in the year.

Most likely it will be introduced in the warmer months, when everything has calmed down again, or it could be introduced piecemeal, with abolishing Section 21 taking precedence. Alternatively, it may be pushed aside by far more pressing business. Only time will tell.

What are landlords looking for in a letting agency?

Will your team be first past the post? Join the ValPal-sponsored Lockdown Gold Cup!

How can agents engage with social media followers during lockdown?